Transportation to Évora from Lisbon

How to go to Évora by bus, train or car 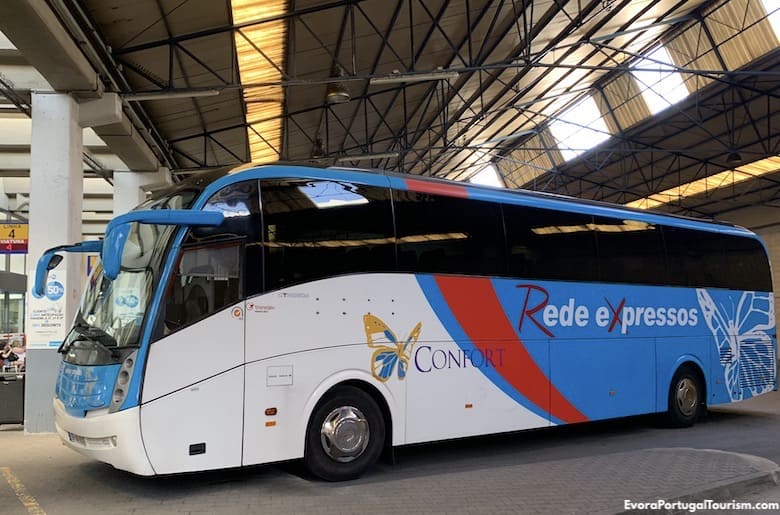 To go from Lisbon to Évora by public transportation, you have the option of an express bus and the train. Both take just over 90 minutes, and have their advantages and disadvantages. The bus has many more daily departures and is slightly cheaper, while the train takes a more scenic route and offers more leg room. They both terminate in the center of Évora, at stations within walking distance of all of the attractions, which are mostly found within the medieval wall. 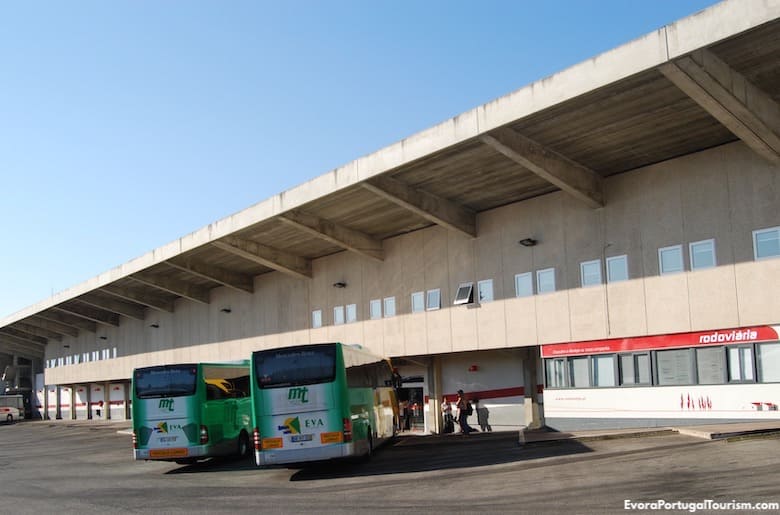 Bus from Lisbon to Évora

The bus, operated by the Rede Expressos company, departs from Sete Rios station, which is outside the Jardim Zoológico station of the metro (blue line). There are several departures throughout the day (one or two per hour), and tickets are €12.50 and bought at the station, not from the driver. You may also buy them online, at the rede-expressos.pt website (when selecting the station in Lisbon, it’s the one listed as “Lisboa Sete Rios”), but the website isn’t always working, so it’s recommended that you arrive early at the station to buy your ticket at the counter.
The buses are modern, clean, and with air conditioning. Before boarding, check your ticket for your seat number (marked “Lugar”). Also check the screens at the station for the number of the departure bay and to confirm the time, as there may be delays (departures from Lisbon are usually on time).
Upon arrival in Évora, turn right out of the station, and walk down the road (Avenida de São Sebastião). You’ll reach the medieval wall and the gateway to the old city in less than 5 minutes. Once you enter the walled city (passing between two crenelated towers), continue straight down Rua de Serpa Pinto, and you’ll reach the main square, Praça do Giraldo. It’s home to the tourist office, and from there you may walk to the main sights, like the Roman temple, the cathedral, and the Chapel of Bones.

Train from Lisbon to Évora

The train to Évora departs from Oriente Station, which is on the red line of the metro. After Oriente, it makes two stops in Lisbon before heading south -- at Entrecampos (on the yellow line of the metro) and Sete Rios (connected to Jardim Zoológico station on the blue line of the metro). There are just five services on weekdays (at 7:02am, 9:02am, 1h32pm, 5:02pm and 7:02pm), and three on weekends (9:52am, 5:02pm and 7:02pm). It’s operated by the national CP company, and to check schedules and buy tickets, visit the cp.pt website.
Tickets may be bought at the station (never onboard), and are €12.50 for the regular 2nd class, and €16.65 for 1st class. There isn’t much difference between first and second class, except for the availability of power outlets and more spacious seats in the first. Each passenger is assigned a seat, which is displayed on the ticket, together with the carriage number.
The train makes just a few stops in the Alentejo region before Évora, which is the final stop.
Évora’s station is located to the south of the city. Cross the road from the station, and walk down Avenida Dr. Francisco Barahona for about 10 minutes, and you reach the walled city. You’ll walk past the curious Church of St. Blaise, and should continue straight ahead, up Rua da República, until you reach Praça do Giraldo.
The trains back to Lisbon also depart five times a day -- at 7:06am, 9:06am, 11:35am, 4:57pm and 7:06pm on weekdays -- and three times on weekends -- 9:06am, 4:57pm and 7:06pm.
Please note that these times may change at any time and without much notice, so always double-check on the cp.pt website.

Driving from Lisbon to Évora

The good bus and train connections mean that you don’t really need a car to travel from Lisbon to Évora, but your own transportation does allow you to stop when and wherever you want. It’s also the only way to reach the fascinating prehistoric sites in the area, like the Almendres Cromlech, which can’t be reached by public transportation and would otherwise be accessible only on a sightseeing tour. From Lisbon, cross 25 de Abril Bridge, which takes you to highway A2, which connects to the A6 to Évora. You may also cross the Vasco da Gama Bridge, which connects to the A12 and then to the A2 and the A6. Although the 25 de Abril is closer to the center of the city, traffic can be a nightmare, so the Vasco da Gama is the recommended bridge. There are signs pointing to Évora along the way, so you don’t even need a GPS. The complete journey is less than 140 kilometers, and takes about 1 hour and 30 minutes.