Home > What to See and Do > Évora Museum

The Évora Museum is in the former archbishop's palace

A 16th-century archbishop's palace, found between the Roman temple and the city's cathedral, is now the Évora Museum. Created in 1915, it traces Évora's long history and culture, and was officially dedicated to Frei Manuel do Cenáculo in 2017. Frei Manuel do Cenáculo was an 18th-century monk who became the bishop of Évora and collected many of the archaeological pieces of the collection, which also includes art from extinct convents and churches.

The museum presents artifacts found in the Évora region, dating back to Roman and Visigothic times.

Among the 20,000 pieces are Roman sculptures, Visigothic and medieval artifacts, Episcopal furnishings and Portuguese and Flemish paintings. One of the highlights is “Life of the Virgin," a 13-panel series of images that make up a single work painted in 1500, illustrating the life of the Virgin Mary. It was once part of Évora's cathedral and is one of the largest Flemish retables in the world. There are also 16th-century paintings by Josefa d’Óbidos (one of Portugal’s first prominent female artists), a crucifixion of Jesus by Gregório Lopes (one of the most important Renaissance painters in Portugal), and a painting of King Afonso VI as a child with a black servant (dating from around 1650, this is one of the earliest depictions of enslaved Africans in Europe). 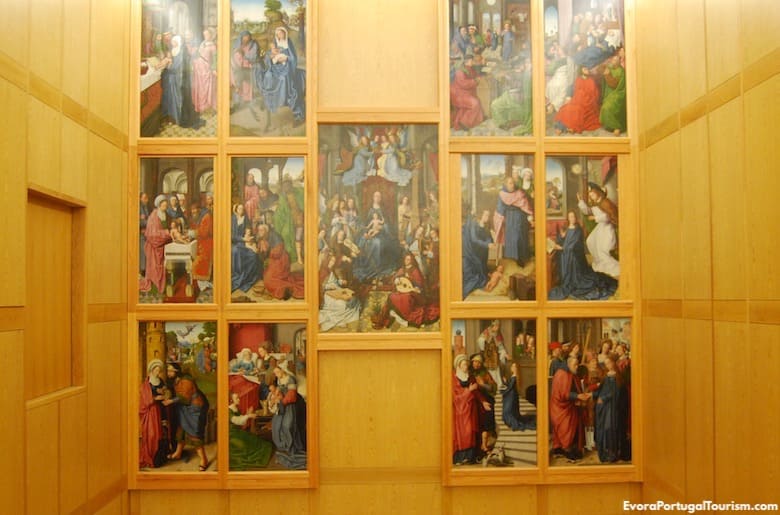 One of the largest Flemish retables in the world, depicting the Life of the Virgin, is one of the highlights of the museum.

Also part of the museum's collection are the artifacts found around the Dolmen of Zambujeiro, including rare prehistoric jewelry.


Admission and Tickets to the Évora Museum

The museum opens from 9:30am to 5:30pm between November and March, and from 10am to 6pm between April and October. It’s closed on Monday