Home > What to See and Do > Bones Chapel 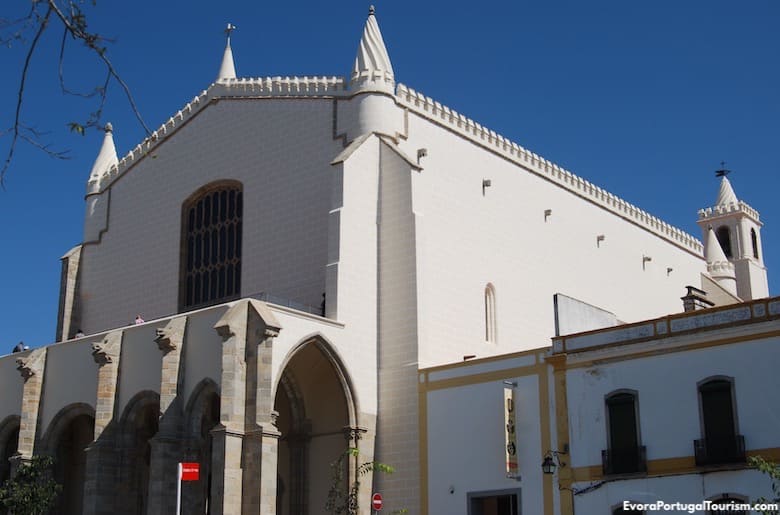 The church dedicated to St. Francis, which hides the famous Chapel of Bones.

The gothic St. Francis Church is even more famous than the city's cathedral, thanks to its mesmerizing Chapel of Bones. Carefully-arranged skulls and bones of about 5000 people cover walls and columns, as 17th-century monks decided to display them. It’s a rather artistic creation, forming decorative patterns, but it arose out of necessity, not for the sake of art. The city’s graveyards were just too overcrowded at the time, so skeletons were exhumed so new bodies could take their place. It was once believed that these were victims of the plague, which killed millions throughout Europe in the 14th century, but research has found them to simply be the remains of the general population of Évora, buried in different periods. There are also two mummies, which legend says are a father and son, but a scientific investigation completed in 2019 has concluded that they’re in fact a woman and a girl. The woman died between the age of 30 and 50, probably from a tooth infection, while the girl was just 2 or 3 years old. 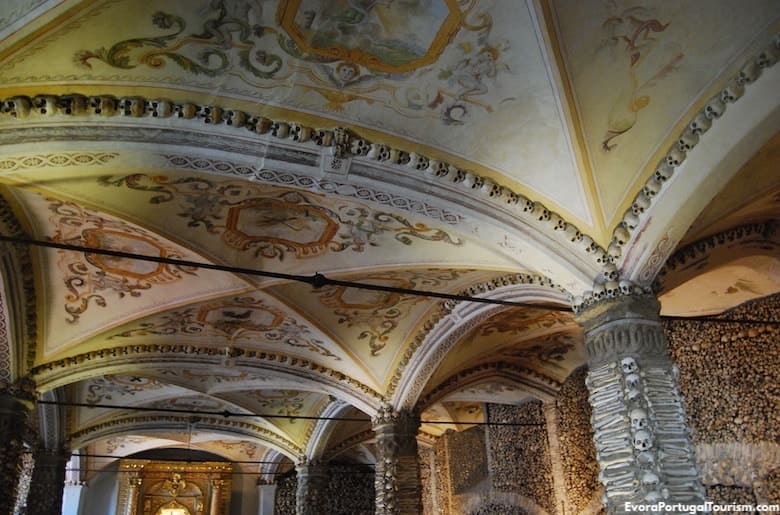 The chapel decorated with frescoes and human bones and skulls.

The chapel is supposed to make visitors meditate about life and death, something inevitable as soon as they enter and read the inscription that translates to "We bones that are here, await yours." The vaulted ceiling is decorated with frescoes from 1810, and facing the entrance is a modern tile panel, created in 2015 by architect Siza Vieira, alluding to the “miracle of life.” 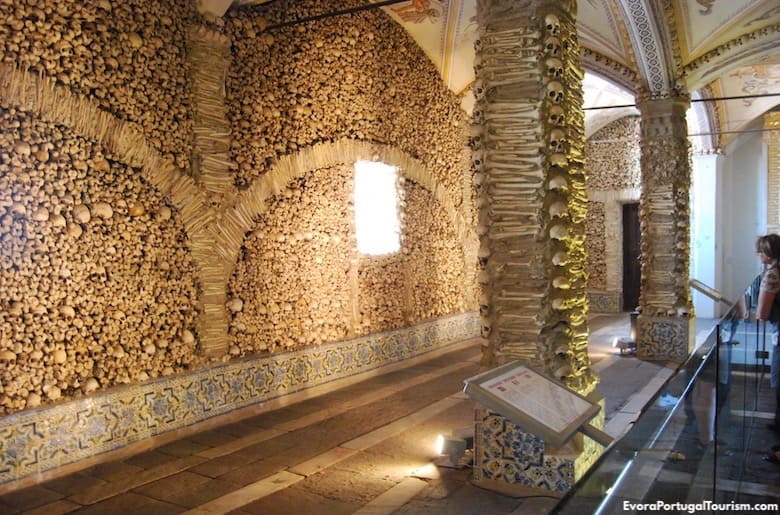 The Chapel of Bones is one of Évora's most-visited attractions

After the morbid but fascinating chapel, a visit continues to the church next door. It’s one of the most impressive monuments built in the Gothic and Manueline (Portuguese Gothic) style, and is classified as a National Monument. Erected between 1480 and 1510, it features ornamentation related to the Age of Discovery, and is where Portugal’s first great playwright (Gil Vicente) was buried in 1536. 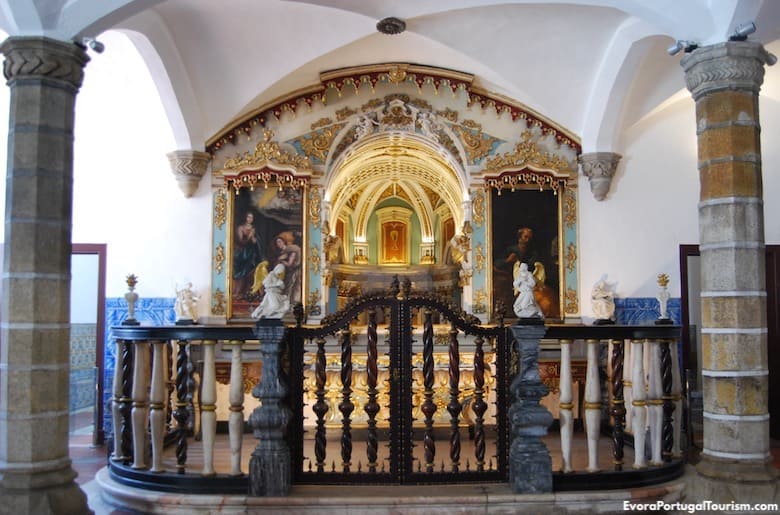 Another chapel in the church, seen by the entrance to the Chapel of Bones.

It has gold-covered altarpieces from the 1700s, and three historic pipe organs that are still used in occasional concerts. Everything seems to be perfectly preserved, after a major restoration in 2014 and 2015, when a new museum was created. This museum displays paintings that once decorated convents, plus religious sculptures, sacred art and a collection of nativity scenes. There’s also a terrace with a view of the cathedral. 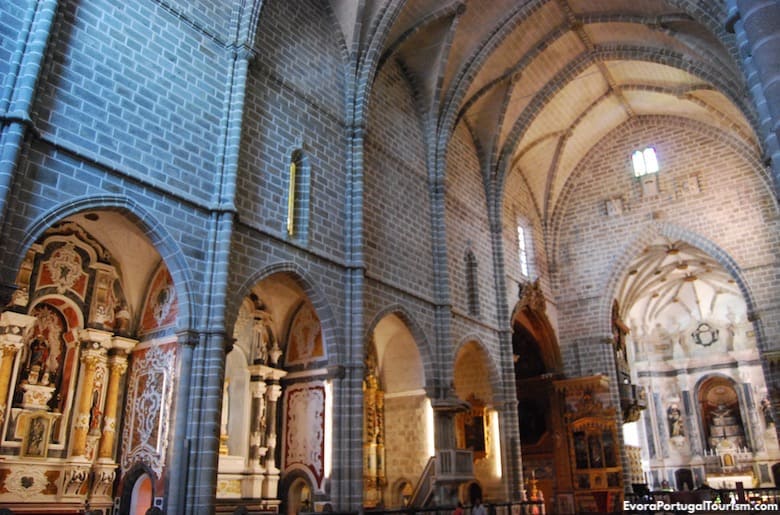 The temple was considered a royal church, as it was found by the royal palace which stood on today’s Public Garden (the royal coat of arms is sculpted in marble on the portal). It was the stage of major ceremonies, like the royal wedding between Prince Afonso and Isabella of Castile in 1490. Only part of the palace in the garden survives, but both that building and the garden should be your next stop after a visit to the church. 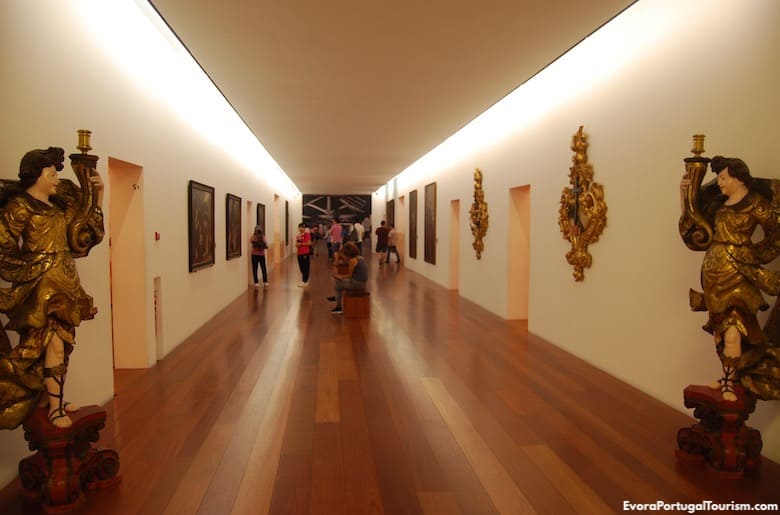 
Admission and Tickets to the Chapel of Bones


Tickets to the Chapel of Bones are €5.00, and include admission to the church’s museum.

It opens daily at 9am and closes at 5pm in the winter and at 6:30pm in the summer.